Dr. Ghayouri M.D. is a Polycystic Ovary Syndrome (PCOS) doctor in San Diego.  Hirsutism is a common problem in young women and should be evaluated in the context of the patient’s history and ethnic extraction. The history of a woman with hirsutism should ascertain the age of onset, rate of progression, presence of virilization (voice deepening, clitoral enlargement), and presence of other symptoms, such as galactorrhea, bruising, or myopathy. PCOS, the most common cause of hirsutism, normally starts during pubertal development, progresses slowly, and does not cause virilization or cushingoid features. A measurement of the total serum testosterone level is recommended to exclude androgen-producing tumors, Cushing syndrome, and occult 21-hydroxylase deficiency, particularly when the hirsutism involves sudden onset and rapid progression. Exogenous androgen use, including use of nutraceuticals (such as dehydroepiandrosterone), should be considered in the differential diagnosis of hirsutism.

The diagnosis of PCOS, according to the current Rotterdam criteria, requires two of the three following findings: ovulatory dysfunction, laboratory or clinical evidence of hyperandrogenism, and ultrasonographic evidence of polycystic ovaries. Additional diagnostic testing for Cushing syndrome, 21-hydroxylase deficiency, hyperprolactinemia, and other disorders is based on the history and physical examination findings. Because PCOS is associated with the progression to diabetes mellitus and metabolic syndrome, the measurement of fasting glucose and lipid levels also is appropriate in women with PCOS. Get checked by Dr. Ghayouri, a PCOS doctor in San Diego. 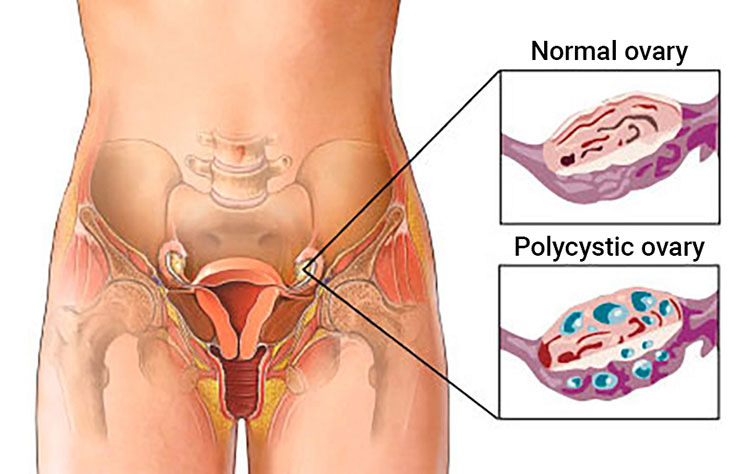